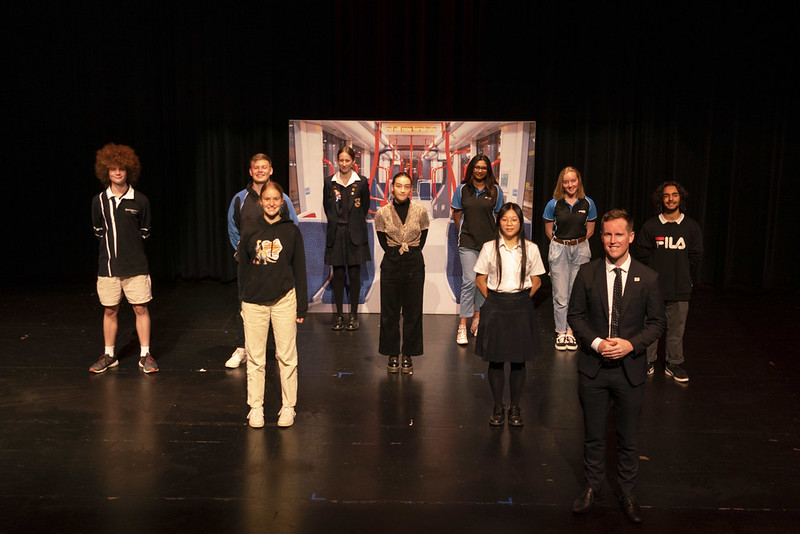 Introducing Shivansh, Emma, James & Elizabeth – 4 very talented ACT college students who will be recording updated on-board passenger announcements for the light rail. CMET is updating the voices for the pre-recorded public announcements to coincide with the opening of the 14th light rail stop at Sandford Street in Mitchell, which is expected to open in the second half of 2021.

First held in 2018 the Voice of the Light Rail competition was held for the second time in April 2021 and was again a resounding success, with finalists from 3 of the Colleges along the light rail stage 1 route.

On Wednesday 28 April, students from Gungahlin, Dickson and Merici Colleges participated in the live final auditions to become the next Voices of the Light Rail. Selected from an initial 16 applications, the 9 students had ‘blind’ auditions, presenting 3 audio announcements behind a screen in the Gungahlin College Theatre to an audience of friends, family, media and our judging panel. After an initial round of announcements and deliberation from the judges, each student, identified only by a randomly assigned number, had a final chance to wow the judges with their announcements before the judges chose the winners. The finals were tightly contested, with two students required to give additional announcements before a decision was reached. Four students, representing all three schools, were chosen to be the next voice of the light rail.

Passengers will be able to get to know the four new voices they will hear on their light rail journeys over the coming months, with profiles here on the CMET website, as well as featuring on a University of Canberra UnCover podcast, a podcast series tailored to your light rail journey. Find all the episodes here.

Check out the auditions: