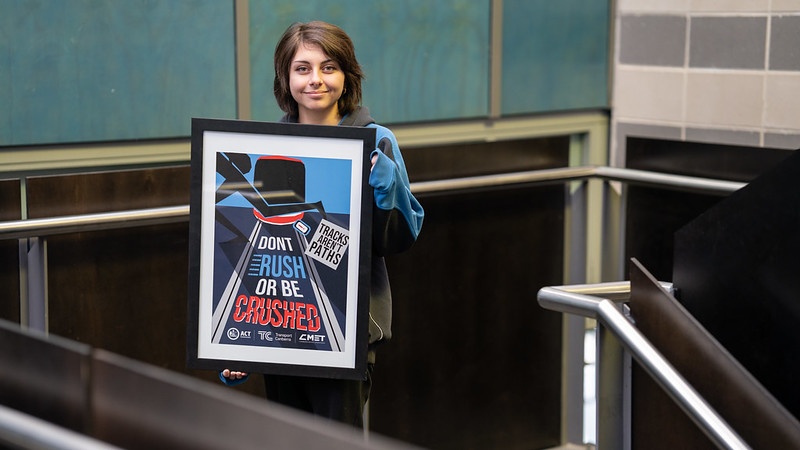 Meet Ada Miller, year 12 student at Gungahlin College, winner of the 2021 CMET Safety Poster Competition and the designer of the newest light rail safety message on the side of a light rail vehicle (LRV). Following in the footsteps of Tahlia Jones, the 2019 winner of CMET’s Safety Poster Competition who has had her iconic ‘pop art’ travelling between Gungahlin and the city reminding Canberra’s to ‘Be safe – Be seen’ for more than 18 months, Ada will now also be able to add ‘designer, light rail vehicle wrap’ to her resume.

Ada’s design stands out against the bright red of Canberra’s LRVs, featuring blues and darker tones and contrasting text. “I tried to make my design simple and focused on the typography. A complicated design would have distracted from the message, which is the main part of the artwork.”

Ada’s wrap design is based on the poster that won the 2021 CMET Safety Poster Competition. Emblazoned between light rail tracks, ‘Don’t rush or be crushed’. With an LRV in the background and a silhouette running across the front of it, the message is clear; tracks aren’t paths, wait your turn. Thrilled to have won the competition, Ada was looking forward to the unveiling of her design, and being able to share it with those close to her, “It’s really exciting! It’s going to be weird, but really good, we will be able to send pictures to our family in Turkey.”

The inspiration for her winning design? “It is something for students to relate to, to get them to listen. And it goes for everyone, if you’re late you rush, and rushing across tracks might seem like a good idea while you’re doing it but there are consequences.” Those consequences are only too real for survivors of rail accidents, like 2021 Rail Safety Week ambassador Vanessa Low, who lost both legs in a rail accident in Germany when she was 15.

The one message Ada has for Canberrans this Rail Safety Week is, “Your safety is more important than being on time to an event.” So next time you’re running late remember, ‘Don’t rush or be crushed!’

Keep an eye out for Ada’s artwork on the light rail network and see all Safety Poster Competition entrant’s designs on board light rail vehicle 006 at a mobile gallery event on Monday 9 August, from 12:30pm to 2pm. More information can be found on our Facebook page.